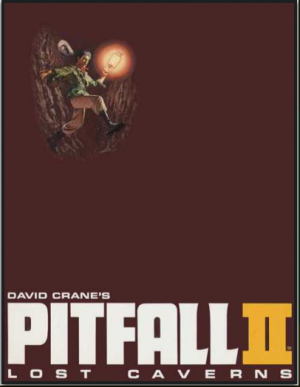 From the game manual — “Help Pitfall Harry find his niece Rhonda, the cowardly cat Quickclaw and the great Raj diamond. On the way grab all the gold bars you can (and be on the lookout for a pesky stone-aged rat). There is no time limit in the caverns!”

I never understood the allure of Activision’s 1982 game Pitfall! for the Atari 2600. The first few plays were pretty neat, but after a while, the whole swinging over crocodile-infested waters and jumping over pixelated scorpions and campfires using a little guy dressed like a tree didn’t seem as fun as it should have. It’s possible there were some unreal expectations at the time, but honestly, I thought the hype was a bit over-hyped. I understand that Pitfall! was a giant step forward for console video games, but it still felt somewhat repetitive and pointless like many other titles out there at the time. Unlike today’s games that run on what would’ve been considered super computers back in the olde Atari days, there were very few games that had characters that were anything more than a few dots on a screen. In this case, “Pitfall Harry”. To be a true adventurer, there had to be more to Pitfall Harry than running one direction through a jungle, where one screen looked mostly the same as the previous. And that more came in 1984 with the sequel to Pitfall!. 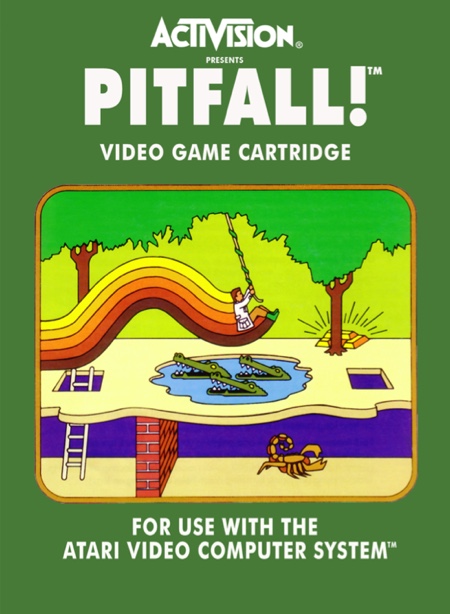 The package cover for the Atari 2600 version of Pitfall!.

Pitfall II: Lost Caverns was just plain exciting. Even for today, it’s pretty amazing what this little 8-bit game could do. As Pitfall Harry, you could go up and down levels with smooth scrolling, swim in water, and ride a balloon in addition to all the regular Pitfall actions including running and jumping over stuff. Plus there was a catchy soundtrack that I still admit to humming every now and then. Part of what made it better than Pitfall! was that you could die many times and not have to start over at the beginning anew. In Pitfall! you had two guys, and after you blew through them, you were done and had to start over. In Pitfall II, if you died you would be returned to a save point that became active after you walked over it. Since getting killed didn’t force you to start over again, Pitfall II ended up being one of the first games that you could binge play until you solved it.

The things that could hurt you in Pitfall II were plentiful: bats, scorpions, slow-moving condors (which apparently live in caves), eels that blinked black and white to show that they were “electric”, frogs—because nothing is as deadly as a large frog jumping back and forth—and a stupid rat1 that didn’t kill you but would push you across the screen and not allow you to advance.

The Atari 2600 with its original wood paneling on the front. Later versions dropped the wood for a sleeker but less distinctive look.

From a technical standpoint, Pitfall II was innovative with its hardware as well as the software on it. The game’s designer, David Crane—a co-founder of Activision who designed and coded several great titles including the original Pitfall!, Grand Prix, Kaboom!, and Ghostbusters—created a special component that was built into the cartridge called the “display processor chip”, or “DPC”, which he had to include to help enhance the capabilities of the Atari 2600. For those of you who’ve never seen an Atari 2600, the games lived in interchangeable cartridges that housed small circuit boards with the games’ programming. These cartridges are what allowed Crane to pack in his extra circuitry to more or less hack the Atari 2600 to run a game that it otherwise couldn’t. In the case of Pitfall II, without Crane’s very very very clever component, the game would not have been able to scroll as smoothly nor would it have been able to provide such a kick-ass soundtrack.

The Pitfall II soundtrack was very advanced for its time — and catchy too!

In order to fully appreciate Pitfall II: Lost Caverns, you have to consider the gaming landscape at that time to really understand how far it brought home gaming (remember, these were the days where the best games were at the arcade). Games at the time were good, but they lacked a certain depth, especially compared to today’s cinematic and VR gaming experiences. This may sound like sacrilege to the millions of former Atari 2600 owners, but after a while a lot of the games got pretty boring. Most games you’d play for points alone. Each level would get harder and harder until it started to feel futile. Pitfall II had a satisfying endpoint making it a true adventure that with a little off-screen imagination almost felt like a story. And it had characters too! They include Pitfall Harry, the main character who is running through the caverns, his niece Rhonda, and silly mountain lion Quickclaw2. It wasn’t so much about points as it was about finishing the game, like its predecessor, but in this case it felt more real with its soundtrack and characters. Games that trace some of their concepts and game-play roots back to Pitfall II: Lost Caverns include The Legend of Zelda, Super Mario Brothers, Metroid, Contra and Halo.

When Pac-Man came out in 1980, it was big. I mean really big. Like “stand in a 10-person line to play for just a few minutes” big. For the price of 25¢, you could guide Pac-Man — a little, binge-eating, yellow, three-quarter circle — through a maze loaded with tasty little white pellets, while being chased by four colorful little ghosts named Inky,…read more

THE LAST THING HE TOLD ME

Hannah Hall discovers truths about her missing husband and bonds with his daughter from a previous relationship.

After an extramarital dalliance, Elle must choose between her husband and her childhood love.