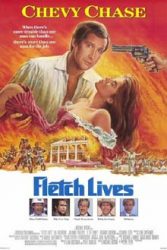 The sequel didn’t quite live up to the reputation of Fletch. Although Chase himself could be funny at times, the script was not as strong and the gags in it were simply not as good as in the first. As a result, the movie reviews were generally negative.

The original movie and characters were based on those in the popular Fletch novel series, written by Gregory MacDonald.

From the game manual — “Help Pitfall Harry find his niece Rhonda, the cowardly cat Quickclaw and the great Raj diamond. On the way grab all the gold bars you can (and be on the lookout for a pesky stone-aged rat). There is no time limit in the caverns!” I never understood the allure of Activision’s 1982 game Pitfall! for the…read more