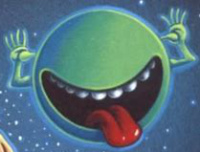 The Restaurant at the End of the Universe is the second book in author Douglas Adams’ Hitchhiker’s Guide to the Galaxy series. Published in 1980, it follows the further random, improbable, and ridiculous intergalactic exploits of: Arthur Dent, an Earthling who escaped Earth just before it was destroyed to make way for a hyperspace by-pass; Ford Prefect, a humanoid alien from Betelgeuse 5 who is an intergalactic hitchhiker and reporter for the fictional guidebook The Hitchhiker’s Guide to the Galaxy, his name he took on Earth to seem less conspicuous; Zaphod Beeblebrox, the narcissistic, two-headed, three-armed President of the Galaxy; Trillian an Earthling mathematician and physicist whom Arthur had met at a party six months before the world ended but had left the party and Earth to travel with Zaphod; and Marvin, a bored and depressed robot — he is often referred to by Zaphod as the “paranoid android”, but he never really showed any signs of paranoia in the books. 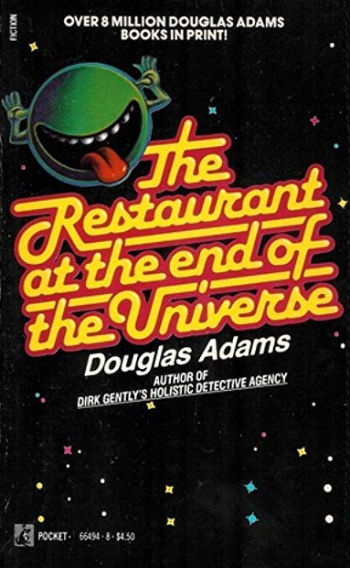 The books in the series in order are:

There is also a sixth book in the series which was published in 2009, although it was not written by Douglas Adams who died in 2001. It is called And Another Thing… and was written by science fiction writer Eoin Colfer.

The book and series have been adapted to radio, TV, film, and video game.