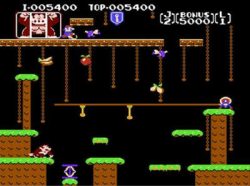 Donkey Kong Junior was the second video game in the Donkey Kong video game series. It was produced by Nintendo, Inc. and released in August 1982 as a follow-up to the wildly successful 1981 game Donkey Kong.

It was also the second game where the character named “Mario” appeared in a video game. Mario has since been used in a number of Nintendo-produced games, as well as the characters of Donkey Kong and his son Donkey Kong, Jr.

Donkey Kong Junior was released on a number of home consoles and in a standup arcade cabinet.

From the game manual — “Help Pitfall Harry find his niece Rhonda, the cowardly cat Quickclaw and the great Raj diamond. On the way grab all the gold bars you can (and be on the lookout for a pesky stone-aged rat). There is no time limit in the caverns!” I never understood the allure of Activision’s 1982 game Pitfall! for the…read more