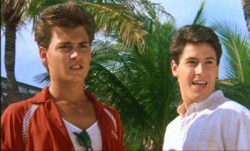 Private Resort (Tri Star, 1985) was the second movie that Johnny Depp ever appeared in, and his first in a starring role. Appearing alongside Rob Morrow (his first film), the movie is about two late-teen boys who spend a weekend at a private beach resort where they hope to have sex with some or all of the many bikini-clad women there. There are other subplots going on, but for the most part it’s teenage male fantasy as imagined by silly middle-aged producers. The names of the characters don’t matter either because nobody cares. The movie is flat-out terrible.

For those who are interested, you get to see Rob Morrow’s and Johnny Depp’s bare butts, along with many pairs of bare breasts whose appearances are usually the result of some stupid-assed joke or situation as dreamed up by the dumb-fucks who wrote this piece of shit.

Even Johnny Depp and Rob Morrow make fun of this one. If you’re curious to view the movie as part of a general anthropological study on shitty early 80s teen fantasy, or if you just want to see topless women, cringey ethnic and racial stereotypes, and too-low-for-even-lowbrow humor, then go on and have a look. You’ll hate yourself afterwards.