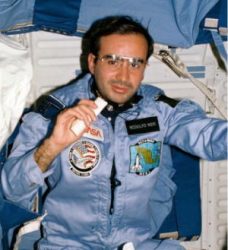 The second person from Latin America to fly into space was Rudolpho Neri Vela from Mexico. A scientist and engineer as well as an astronaut, Vela was born in Chilpancingo, Guerrero estado, Mexico on February 19, 1958. Vela holds a Ph.D in electromagnetic radiation from the University of Birmingham. His flight where he became the second person from Latin America to fly in space was aboard the U.S. space shuttle Atlantis (STS-61B), which launched on the evening of November 26, 1985, from the Kennedy Space Center at Cape Canaveral, FL. He along with the rest of his crew landed safely at Edwards Air Force Base in California on December 3. During the mission, the crew put 3 communication satellites into Earth orbit. Vela himself was in charge of several experiments while in orbit. Over the course of his flight, Vela had traveled 2.4 million miles (3.9 million km) over 108 Earth orbits, and spent in all a little over 165 hours in space. Aside from being the second Latin American astronaut to travel in space, Vela was the first person from Mexico to fly in space.

The first Astronaut from Latin America to fly in space was Cuban cosmonaut Arnaldo Tamayo Méndez. His flight took place on September 18, 1980, on the Soyuz 88 mission for the Soviet Union.