By the time astronaut James McDivitt stepped into the Apollo 9 spacecraft on March 3, 1969, he had already built a reputation as a solid and trusted American pilot and astronaut. A member of NASA’s “Second Group” of astronauts, his first trip into space came as mission commander of the Gemini IV mission in June 1965. That particular mission was notable because during its flight, astronaut Ed White exited the craft becoming the first U.S. astronaut to ever perform a spacewalk. McDivitt didn’t get the same glory or notoriety as his crew mate, but in those days it wasn’t only about the glory of the first, but also the pride in being a part of the overall achievement. This is no less so for McDivitt’s second journey into space aboard Apollo 9.

Apollo 11 is the mission everyone grew up knowing about — the mission that put the first humans on the moon. But in the decade leading up to that great feat of human exploration there were incremental steps that needed to be taken to ensure that the first mission to the moon would be a success. One of the biggest steps taken was during McDivitt’s second trip into space when he served as mission commander during the Apollo 9 mission.

Apollo 9 is often overlooked when it comes to the overall story of the U.S. putting astronauts on the moon. Apollo 8 had put astronauts into lunar orbit for the first time — a very scary feat for the time. Apollo 10 was the “dress rehearsal” for Apollo 11, during which the crew performed every task required to get people on to the surface of the moon just short of actually landing on it — they blasted off, docked with the lunar module, flew to the moon, entered into orbit around the moon (for the second time in human history), flew the lunar module to within 9 miles of the lunar surface, docked with the command module, and returned to Earth. Apollo 9 was a sort of bridge between those two missions.

The main goal of Apollo 9 was to test-fly for the first time the lunar module. It was also the first time that all components of the later Apollo lunar missions (command, service, and lunar modules) were launched into space. Apollo 9 launched from Kennedy Space center on March 3, 1969, and went into Earth orbit with McDivitt as mission commander, David Scott as command module pilot, and Russell Schweickart as the lunar module pilot. Over the course of the 10-day mission, McDivitt and Schweickart performed numerous tests on the lunar module and other equipment. The most notable of those tests involved the two astronauts separating the lunar module from the command module and piloting the lunar module on a series of maneuvers to simulate those to be performed on later missions when an eventual landing on the moon would happen. The importance of this test cannot be overstated as the lunar module was not only a freaky looking craft but one that had some limited visibility. Fortunately the tests turned out well and a lot of data for later analysis was gleaned. When back on Earth later, McDivitt would help tweak the lunar module’s design for better handling and safety. 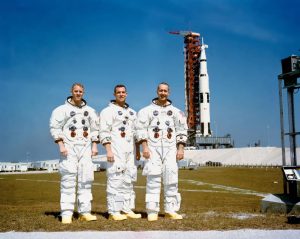 NASA intends to put humans back on the moon in the coming decades with an eye toward a permanent human presence there. As the decades pass, Apollo 9 will become more and more of a footnote in the greater story of human lunar exploration. Indeed many cynics will also continue to dismiss many of these achievements as little more than Cold-War propaganda. But neither history nor cynicism can take away from the advances in technology and science that came as a result of the NASA space program. And for that, people like McDivitt deserve their rightful places as titans in the pursuit of human scientific achievement.

James McDivitt passed away on October 18, 2022, at the age of 93. A well-respected pilot, astronaut, lunar operations manager, and later business person, under his steady leadership of Apollo 9, his successful second flight was a vital contribution to what would eventually be one of humanity’s biggest firsts.