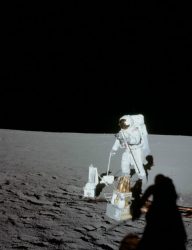 The second crewed mission to land on the surface of the moon was the Apollo 12 moon mission and was carried out by the U.S. National Aeronautics & Space Administration (NASA). The crew was composed of Mission Commander Charles “Pete” Conrad, Lunar Module Pilot Alan L. Bean, and Command Module pilot Richard F. Gordon, with Conrad and Bean being the ones who actually touched down on the lunar surface.

Some notable achievements and events during the mission: