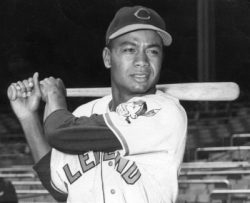 Larry Doby (born December 13, 1923; died June 18, 2003) was the second black player to play in the Major Leagues, and the first to play in the American League. Doby first took to the field for the Cleveland Indians on July 5, 1947, in a game against the Chicago White Sox at old Comiskey Park. This happened almost 3 months after Jackie Robinson of the Brooklyn Dodgers became the first to break the racial barrier in baseball.

After a thirteen-year career that ended in 1959, Doby retired. He was inducted into the National Baseball Hall of Fame in 1998. Over the course of his career, the seven-time All-Star hit 253 home runs, 970 RBIs, and finished with a carrear batting average of .283, with 1,515 hits.