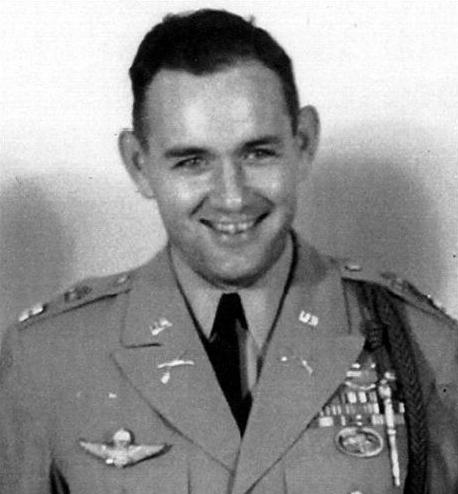 In honor of the excellent Ken Burns and Lynn Novick documentary The Vietnam War, which is currently showing on PBS, I thought it was a fitting time to highlight Harry Griffith Cramer, Jr., the person considered to be the second U.S. soldier killed during that conflict. Before we go on, it’s worth mentioning that this is a case where it is difficult to tell exactly when the war began, since the United States never actually declared war on North Vietnam. The U.S. government officially lists the start date of the war as November 1, 1955, the date that the U.S. Department of Defense chose based on organization and reclassification of American military units in the country. If that doesn’t seem convincing, we’ll use the Vietnam War Memorial in Washington D.C., which lists the names of every American soldier killed during the war, as the arbiter of who died when.

Cramer was the ultimate all-American G.I. Joe. He was born in Johnstown, PA, on May 1, 1926, into a family that had a long history of military service. His grandfather served as a sergeant in the Union Army during the U.S. Civil War, and his father served as an officer in France during WWI. Cramer for his part attended the United States Military Academy at West Point where he became the youngest member of the Class of ’46. He did his infantry and airborne training at Fort Benning, GA, before being sent to Japan where he served as part of the post-WWII occupation force. After a short period there, he was rotated back stateside where he served as a recruiting officer in Fort Dix, NJ, until war broke out in Korea. Not wanting to miss out on the action, then-Lt. Kramer requested a combat command and was promptly shipped over to South Korea where he served as a platoon commander in 1st Battalion, 24th Infantry Regiment, 25th Army Division. It was during the Korean War that Cramer really showed off his toughness and dedication.

Within a month of taking command of his platoon, in 1951 Cramer’s platoon took part in an assault in the “Iron Triangle” of South Korea. During the battle, the American attack stalled with enemy combatants holding a strong position. Pinned down by enemy fire, Cramer decided that enough was enough and personally led a bayonet charge that drove the enemy from their trenches. It didn’t end so well for Cramer, however, as he ended up wounded by machine gun fire. After three months recuperating in Japan, he was given a Purple Heart and a Silver Star for Gallantry before being promoted to Captain. He then went back to Korea where again he was wounded, this time by mortar shrapnel in his shoulder and back. When a stalemate in the war was reached and the fighting sort of quieted down a bit, Kramer grew restless and got transferred to serve in a reconnaissance plane as an aerial spotter.

With his bad-ass credentials firmly in hand, in 1952 Cramer was sent back to the U.S. where he underwent advanced infantry training in Georgia, before moving on to North Carolina where he passed Special Forces selection. The first West Pointer to pass selection, he was assigned to the 77th Special Forces Group and then to the 14th Special Forces Operational Detachment whose job was to train local and indigenous forces in how to fight. That’s how Cramer ended up in Vietnam training Vietnamese Special Forces. It was during a very realistic training exercise that Cramer was killed.

One of the Vietnamese soldiers near him, during an ambush exercise, went to throw a lit chunk of melanite — a type of picric acid-based explosive used by the French army back then — however, the explosive was unstable and exploded prematurely, killing Cramer almost instantly. At least that’s what the official report initially said. It was later learned, however, based on the testimony of two of the medics serving with Cramer at the scene, that there had been several Viet Cong (a commie guerrilla force backed later by North Vietnam) mortar rounds fired into the area as the ambush exercise commenced. Now this may seem like some revisionist/conspiracy BS, but there was a lot of subversive activity going on that wasn’t exactly hitting the headlines back home. The day after Cramer’s death, the Viet Cong detonated a rather large bomb just outside a billet in Saigon, which shows just how dangerous things were getting there. As for why it would initially have been listed as an “accident”, the army had reason to deny that Cramer was killed by guerrillas, mainly that they didn’t want people back home finding out the dangerous and bad things that were afoot in South Vietnam.

All that aside, Cramer deserved to be recognized as a veteran of the Vietnam War, but the Defense Department initially saw otherwise. For reasons of politics, law, deniability, or what-have-you, the U.S. Department of Defense for many years considered the war in Vietnam to have begun in 1961. So when the Vietnam Memorial in Washington D.C. was erected in 1982, Cramer’s name was left off of it. This omission didn’t sit well his surviving family, most notably his son, Harry Cramer III. Peeved by the snub, Cramer III spent months navigating through the maze of military and government bureaucracy before finally compelling the U.S. government to not only change the start date to the war in Vietnam to 1955, but to add Cramer’s name to the wall, which they did in 1983. Out of sequence, yes, but there nonetheless.

Whether he was the second, first, third, or last American casualty of the Vietnam, Cramer’s is one of many personal stories of that tragic and ultimately fruitless conflict. The Vietnam Veteran’s Memorial Fund is a great place for putting put some faces to names with this section here called the “Wall of Faces”.