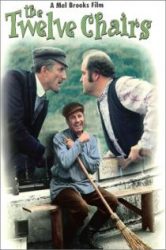 Actor, composer, director, and writer Mel Brooks has directed some of the most well-known comedic films of his era, except maybe for his second comedic film, The 12 Chairs. He adapted the story from a Russian novel about an aristocrat, a priest, and a con-man peasant who go looking for a treasure hidden during the Russian Revolution within one of 12 chairs.

Brooks’ first film, The Producers starring Zero Mostel and Gene Wilder, was a hit comedy when it came out in 1967, and his third film, Blazing Saddles (1974) starring Cleavon Little and Gene Wilder was another huge hit that cut close to the bone in its satirical portrayal of race and the old west. The 12 Chairs even for fans of Mel Brooks is one of those movies that you simply don’t hear about, possibly because it’s wedged between two of his most memorable films, also possibly because it was a little too odd of a plot and setting for a mass audience. At any rate, it is currently regarded as one of his better films, more like The Producers in its reliance on character development and relationships rather than straight-up gags. It was a very cynical view of humanity where greed and cruelty drive the characters as they strive to find a hidden fortune — done so in a funny way, that is. But unlike The Producers, the movie seems to go a bit deeper.

In his 1970 review of the movie, Roger Ebert wrote:

…so while “The Producers” was hilarious, yes, “The Twelve Chairs” is a more fully realized work because it uses comedy not just for laughs but as a tool for examining the human condition.

The 12 Chairs, Mel Brooks’ second film, starred Dom DeLouise, Frank Langella, Ron Moody, and Brooks himself. For a little more background into the production of the film, have a look at this 1997 Los Angeles Times article.