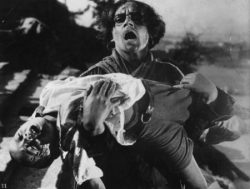 The Battleship Potempkin, which was released in 1925, was Russian (Soviet) filmmaker Sergei Eisenstein’s second full-length feature. His first, Strike, came out earlier that year.

Considered one of the finest films ever made, and a must-see for all film buffs and artistic photographers alike, Potemkin is a silent film celebrating early revolutionaries in Russia before the Soviet Union came into being.

A fine work of Soviet Union communist propaganda Potemkin celebrates the revolutionaries of 1905 who tried to overthrow the Russian Tsar, which didn’t happen until the Russian Revolution of 1917. The film depicts the real-life event of a mutiny aboard a Russian battleship in the Black Sea in 1905. Forced to eat maggot-infested meat, and work like slaves, the sailors on the Potemkin were angry at their ill-treatment by both the ship’s officers and the Tsarist regime. After taking the ship, the crew sailed it to Odessa where they hoped to ignite a wider revolution. Loyalist cossacks arrived and put down the rebellion killing many civilians. The scenes depicted in the movie were very dramatic and violent. As a work of cinematic art, there are numerous famous scenes in the movie, many of which influenced other filmmakers including Charlie Chaplin, Orson Welles, and Billy Wilder all of whom listed Potemkin as one of their favorite films.

Eisenstein’s third full-length flick was October (Ten Days that Shook the World), which was released in 1927.