There are two actress who can lay claim being the second actress to officially play the role of the villain “Catwoman” in the Batman television series (1966-1968) and movie based on the series (Batman: The Movie 1966). The first to play the role is easy; Julie Newmar played the role on the TV series from 1966-1967 and remains the Catwoman gold standard, although Michelle Pfeiffer and Eartha Kitt each gave really strong performances.

Lee Meriweather never appeared as Catwoman on the TV series, but she did appear as Lisa Carson, a character who was kidnapped by King Tut.

Producers of the popular TV series wanted to try their product on the big screen to help build a bigger audience for the series. However, because of the production schedule, Julie Newmar who played the role on the TV series was unavailable. So the role went to Lee Meriweather.

It is generally accepted that the second actress to play the role of Catwoman was in fact Lee Meriweather, since the movie was essentially a really long episode that happened to be shown in theaters and not on TV. Interestingly enough, Lee Meriweather did get a chance to act on the actual TV show, except it was not as Catwoman. She played the role of “Lisa Carson” over two episodes in season 2 of the series. The character was kidnapped by the villain “King Tut”. 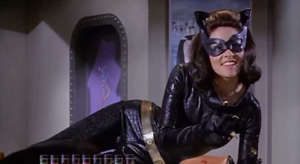 Lee Meriweather as Catwoman in Batman: The Movie.