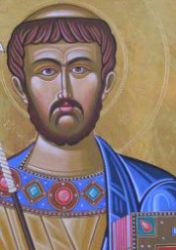 Laurentius, or Laurence, was the second Archbishop of Canterbury, having served from 604 to 619 CE. He was actually consecrated as bishop by his predecessor Augustine of Canterbury, to ensure that there was a successor to the position.

Pope Gregory I in 597 assigned Laurentius to the first Anglo-Saxon mission in England where he was to convert the local population to Roman Catholicism. The locals, who were living by their Celtic traditions, didn’t take kindly to the attempts at conversion and were openly hostile to the missionaries.

During his tenure as Archbishop, King Aethelberht of Kent, who was very tolerant of Christians, died in or about 616. Aethelberht’s successor, Edbald, wasn’t a fan of Christians at all, but Laurentius tried to convert him anyway, and actually may have succeeded.

One of the legends about Laurentius was about a time when he thought to flee England and head back to Rome after the death of Aethelberht, fearing for not only his life but the lives of other Christians in England, many of whom began to leave and go to France. Just before Laurentius himself was about to leave as well, he had a dream where Saint Peter — a long-dead martyr for the church, one of 12 apostles of Jesus Christ, and considered the first Pope of the Roman Catholic Church — visited him and chastised him for trying to leave England. When Laurentius awoke, he was freaked out enough by the dream to stay put in England. By the most outlandish account, Peter beat the living shit out of Laurentius, the marks of which were still there in the morning.

Laurentius died peacefully in 619, and later came to be celebrated as a saint.