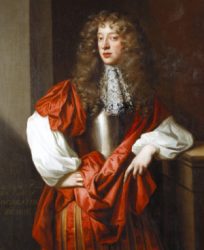 John Wilmot (b. April 1, 1647, d. July 26, 1680), the 2nd Earl of Rochester (Baron of Adderbury in England, Viscount Athlone in Ireland), was one of the most fascinating and entertaining figures in Restoration Period England. Known as a drunk, a rake, an intellectual, and good fun to have around at parties, he died young at the age of 33 from the collective effects of several venereal diseases along with nephritis. His lasting legacy besides his being a complete libertine was as a great poet of his time whose works were once censored during the Victorian Era for having been far too risqué.