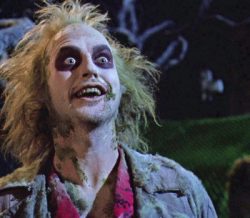 Beetlejuice (Warner Brothers, 1988) was the second feature-length film that Tim Burton directed. The former Disney employee and animator had done several well-received shorts including Vincent and Frankenweenie, before he got his chance at a feature-length gig. That one turned out to be Pee-Wee’s Big Adventure, which did well at the box office and had since developed a cult following.

After the success of his first film, Burton received several scripts to direct for his next project, none of which appealed to him. Finally he got a script for Beetlejuice, which struck him as unique and creative. The film, which stars Michael Keaton, Alec Baldwin, Geena Davis, Winona Ryder, and Catherine O’Hara, was a big financial success and garnered generally positive reviews.