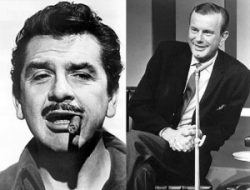 The Tonight Show is an American late-night talk-show that has been airing on NBC since 1954. The first person to regularly play host on the show was comedian Steve Allen who was on the show from 1954 to 1957. As for who technically was the second host depends, like so many other “seconds” on SilverMedals.net, how you define the situation.

During Allen’s stint as host, NBC wanting to give Allen more time to work on his Sunday prime-time variety show, hired comedian Ernie Kovacs to play host on Monday and Tuesday nights beginning in 1956 until both he and Allen left The Tonight Show in 1957.

After a brief period where producers changed the format of the show, even changing its name, they decided to go back to the talk-show format after only a few months. So in 1957 they hired comedian Jack Paar to be the host. He held the position until he left the show in 1962.

Although people today consider Jack Paar to have been the second host of The Tonight Show, it can be easily argued that Ernie Kovacs was the true “second” host.

“You spend a good piece of your life gripping a baseball and in the end it turns out that it was the other way around all the time.” — Jim Bouton (1939 – 2019)   It was sad news to learn of the passing of Jim Bouton yesterday, one of the most fascinating and notorious sports figures in U.S. baseball…read more

Second feats and events can come to me from anywhere here at SilverMedals.net, where I’ve taken the collection of “seconds” in history to new and obsessive levels. This one comes from an interesting book review in the The New Yorker by Adam Gopnik who wrote about composer Andrew Lloyd Weber’s new memoir, Unmasked. In the article, Gopnik expounds on the…read more

An artist upends a quiet town outside Cleveland.

THE BOY FROM THE WOODS

When a girl goes missing, a private investigator’s feral childhood becomes an asset in the search.

THE SPLENDID AND THE VILE

An examination of the leadership of the prime minister Winston Churchill.

DIARY OF AN AWESOME FRIENDLY KID

HOW TO CATCH A UNICORN

Blinding Lights by The Weeknd