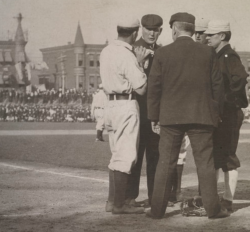 The New York Giants beat the Philadelphia Athletics 4 games to 1 to win the 1905 Major League Baseball World Series. This second World Series featured pitching legends Christy Mathewson who won games 1, 3, and 5 for the Giants, and Charles Albert “Chief” Bender who won game 2 for the Athletics.