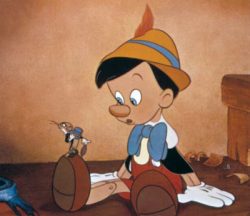 The 1940 animated film Pinocchio was the second animated feature-length film ever produced by Walt Disney Productions.

Disney’s first animated film, Snow White and the Seven Dwarfs (1937), was a huge success in theaters and so the studio was keen on getting a second film in theaters to capitalize on their good publicity. The original second film that was to be released was supposed to be Bambi, however, there were some difficulties in developing the story and animation (apparently it’s not easy to make deer look endearing), so it was set aside in favor of Pinocchio.

Pinocchio the movie is based on the character from the children’s novel The Adventures of Pinocchio, which was written by Carlo Collodi and published in 1883. Unlike the naive and loveable character in the Disney version, Callodi’s Pinocchio was a rude and nasty being who was always getting into trouble. For Disney that wouldn’t do, so they made him more thoughtless and naive with his trouble due to that rather than malevolence. Disney also expanded the role of the cricket to be a major character, the one we all know as Jiminy Cricket. He served as Pinocchio’s guide, conscience, and friend.